These are three of the eight Practice Standards associated with the process of doing math that will now be assessed in states that have adopted the CCSS. Some teachers I have talked to are concerned about how they will incorporate the Practices in their math classes. I decided to share an activity that addresses these three Standards and can be adapted to nearly any content - a Crit Session.

I first heard of Crit Sessions while reading Jonah Lehrer's Imagine. Despite the controversy surrounding this book, I found his description of the Crit Sessions held at Pixar to be particularly interesting and began to consider how to apply this idea in my classes. So I developed the following workshop.

Crit Session for Presentations of Mathematical Thinking
This can be used for any content where students, individually or in groups, are presenting mathematics. The work does not need to be completely thought out. In fact, it helps if the work is "in progress" as the feedback provided by peers can help the students to move forward.

Schema Activation [5 minutes]: Review the information you want to share.

Focus [5 minutes]: What is a Crit Session?
Read the following edited extract from Imagine:

Concentrate on the second paragraph:
Activity [40 minutes - assuming 4 group presentations]: Crit Sessions
Reflection [10 minutes]: What; So What; and Now What?
Back in presentation groups, after everyone has presented, the members share:
The information does not necessarily need to focus on their own presentation since we sometime learn from other people's mistakes.

The students I have tried these Crit Sessions with have been positive about the approach. They appreciate the permission to be critical (critique the reasoning of others). Most times they feel as though they have to be nice, non-critical, in order to have a safe classroom environment. Yet, no one felt attacked or belittled and the classroom community seemed even stronger after the workshop. After all, they were working toward a common goal - success.

I am also impressed with how these Crit Sessions have supported a growth mindset in regards to doing math. The students seem more attuned to the need to put effort into working toward precision in their work and the work of their peers. Also, there is a built in expectation that they will need to make improvements (persevere) to their work. No one expects to get it entirely right the first time.

If you try this approach in your class, please share your efforts and any adaptions you needed to make in the comments. Thanks!
Posted by delta_dc at 12:30 PM 1 comment:

What makes someone an expert in education?

The book is I Got Schooled. M. Night Shyamalan, director and author and education, now, expert.

The above quote is from the interview provided below. To his credit, Mr. Shyamalan immediately corrects the interviewer and says that he considers himself a novice; this seems appropriate given his limited time looking into the educational research.

Still, earlier in the interview he seems comfortable correcting Diane Ravitch. Can we be certain that in five years, Mr. Shyamalan was able to synthesize ALL of the research related to class size that Dr. Ravitch has considered given her over 30 years examining the history of education? Has Mr. Shyamalan considered how increased class sizes might impact the retention of good teachers (one of his 5 keys to closing the achievement gap)? These are issues we might expect in statements made by a novice but these issues were not raised.

To be fair, I can see why an information entertainers might be intimidated by Mr. Shyamalan's work on this book. For someone who has spent no time looking into educational research, five years must seem like an eternity. But for those of us who take education seriously and have been examining the research for a much longer time ... (with apologies to McKayla)

Did you even read the book?

Okay, I admit it. There is the possibility that I am obsessed with the attention director M. Night Shyamalan is getting for his book on education reform. After all, I have been following the press tour for his book and even made a parody video of one of the interviews (see here).  But in my defense, the lack of scrutiny interviewers are giving his research is appalling. Take, for example, this recent exchange on Tavis Smiley's show.

Based on the questions Mr. Smiley asks, I am pretty sure he did not read the book. Neither have I, at least not all of it, but even I know Mr. Shyamalan's talking points by now. And I really wish someone would ask him some substantive follow-up questions. 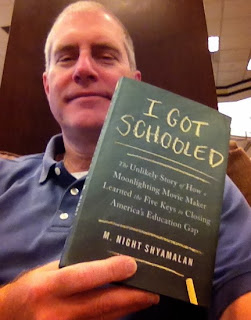 Welcome to Education Matters. My name is David Coffey and with me today is film director M. Night Shyamalan. But he's not here to talk movies. He wants to share what he found as he dug into the research on education - in particular, dealing with the achievement gap.

Good to have you here Mr. Shyamalan. So your book starts with an origin story that describes how you got interested in improving education. Will you share it with us? (The following comes directly from the transcript of the Travis Smiley interview.)

Well, I wouldn’t describe myself as a do-gooder. That’s really more my wife. I’m kind of just the obsessed guy who’s been writing and making movies since I was a little kid, just in a room and make it.

So it sometimes has to hit me in the face for it to actually become personal, and it did. We were location scouting for a movie called “The Happening,” and I needed a high school.

I went to – we got out of the van and the whole crew came with me, and we were checking out a location at this beautiful high school in Philadelphia, and walked in.

The kids were all rushing over when I came in, “Oh my gosh, you’re making a movie here, can I die, can I die in your movie?” It was just so fun. We had a great time.

The teachers were out and there was such buoyancy and excitement, and it was just a great spirit. The school was wonderful. We got in the van and drove, like, four minutes, really hardly a distance, in Philadelphia – I shoot in Philly.

We got to a school where there was metal detectors and there was a guard there that didn’t want to be there, you could tell. We were literally treated like criminals as we walked in.

The kids were walking through the hallways with their heads down, they were looking. One kid looked at me, and in Philly, like, a lot of people know me, and the kid looked at me and he was like, thought for a second there was some recognition, and then he shook his head and kept going. Like there’s no way I could be in his school, right?

He kept on walking. In the other school, anything was possible. They immediately were like, “Oh, you’re making a movie? Can I be in your movie?” The classrooms in the second school were locked behind bars, and the janitor had to go get keys to open each and every door.

The top floor had been shut down because there was so much drug use. The theater had been burned down. It was that kind of situation. It was hopeless. I got upset being there, and I got upset for the kids.

So I have to be honest, Mr. Shyamalan, I haven't read your book - at least not in its entirety. But I read the first chapter on the NPR website, and you seem to answer those questions early in the book. You write:

"It's not apples to apples. Masterman is a magnet school, and a very selective one. Even to apply to Masterman, a fourth-grader — almost every student starts in the fifth grade, and continues to graduation — needs to test in the top 12 percent of all students in the city of Philadelphia."

That seems to explain the difference but you never include this detail as you tell this origin story during interviews. Why not? And is it possible that the second school is suffering because some of the best students, and those with the most engaged parents and guardians, are going to Masteman, the magnet school?

I have some other questions but let's start there. Mr. Shyamalan, how do you view the siphoning off of students to magnets and charters as it relates to the achievement gap?