Can we reclaim assessment?

Each month, a group of faculty members from the two colleges involved in teacher education at GVSU meet to discuss issues related to teacher preparation and professional development. Because of my joint appointment I am a member of this group known as the Professional Teacher Education Advisory Council (PTEAC). Two months ago, a colleague from the English Department brought up the results from the recent PISA (Program for International Student Assessment) for us to discuss.
Many of us were familiar with the results that suggest the United States is lagging behind other countries in education. Going beyond the results, we spent some time putting the data into context. (e.g. U.S. is much more diverse than top countries like Finland and Singapore.) I may come back to this point and what it means in another post, but for now, let’s just say that I see such comparisons as a distraction. Looking at sample PISA math questions, I can say that I want U.S. pupils to be able to answer them correctly. Whether they get more right than pupils in other countries is irrelevant.
A few weeks after this discussion, I attended a higher education conference put on by the GVSU Mathematics Department. One of the keynote speakers, Dr. Zalman Usiskin, opened the conference by addressing some of the same issues we had raised in PTEAC. While it was affirming to hear Dr. Usiskin’s presentation, I was inspired most by his words over lunch. He asked where I taught and I said at the university. He said, “You’re lucky then, because you have more freedom than K12 teachers. I don’t know why anyone would want to be a public school teacher under current conditions.” His words echoed in my head the rest of the conference.
During a panel session at the end of the conference, I listened as a parade of K12 mathematics teachers expressed their frustration with an educational system driven by standardized tests and their concerns about what the Common Core State Standards would add. Being a former middle school teacher I could empathize with their plight but I was somewhat disconnected now being in higher educations. It was then that Dr. Usiskin’s words hit me full force – I am lucky because of the freedom I have. What if I (and other teacher educators) used that freedom to provide cover for our K12 colleagues? 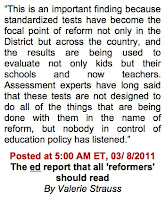 What I am proposing is that we reclaim the narrative related to assessment. Let the politicians and the newspapers have their standardized tests. We can reply, “Yes, those are the results and this is what they REALLY mean but they do not tell a complete story.” Here is where the collaboration between teacher educators and public schools comes into play. Teacher educators have the freedom and the resources available to help design reliable and valid assessments that assess the things local communities decide are important. Things like problem solving and critical thinking that cannot be easily assessed with a multiple-choice, standardized test.
What if schools came to colleges of education with a list of essential skills and processes they wanted to assess? What if the colleges of education used their experiences and resources to develop, implement, and analyzed the assessments? Could this provide the political cover schools need to reclaim the assessment narrative and return them to their proper role as preparers of democratic citizens (instead of test-prep factories)? Is this even possible? If so, then what comes next?
Posted by delta_dc at 11:44 AM