Do you see what I see?

We live right next to the bike path that runs around Spring Lake. The other day I witnessed the following scene that gave me a laugh. A parent and child were riding on a tandem bike (that I have since learned is sometimes called a tag-along). The funny part was that the parent was exerting a great deal of effort to keep the bike moving while the child had his head on the handlebars and his feet off the pedals. I did not have my camera handy, so I took a mental picture and later drew the following: 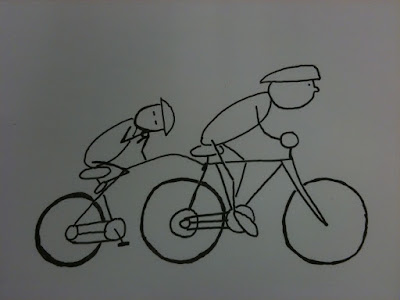 Of course, like any snapshot, it is difficult to tell what happened before that led to the scene or what happened after. But as almost always happens, it got me to thinking about education. I saw the picture as a metaphor for what seems to happen this time of year in a lot of classrooms. Before I go on, I wonder if you see what I see.
Posted by delta_dc at 7:30 AM

Email ThisBlogThis!Share to TwitterShare to FacebookShare to Pinterest
Labels: Reform