Metacognitive Memoirs - what are they?

Metacognition is the awareness of one’s thinking. Memoir is a genre usually referring to a piece of autobiographical writing focusing on some problematic event. Together they represent a powerful tool for helping learners experience what it means to do mathematics by thinking about and communicating their efforts to others. In this session we explore how creative writing supports creative thinking in mathematics – certainly a road less traveled.

This was a breakout session based on a portion of my earlier keynote.
Schema Activation: Cambourne's Conditions of Learning [10 minutes] 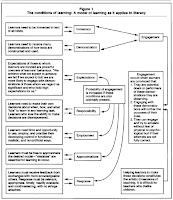 In an effort to connect to their prior learning, participants looked over Figure 1 from Cambourne's article, Toward an educationally relevant theory of literacy learning, and identified what was important, what they could connect to, and what questions they had. Cambourne's Conditions were one of the themes of the keynote and I had promised that we would consider them in more detail during this workshop.
Focus: Metacognitive Memoirs [10 minutes]
Participants read the following information which allowed them to concentrate on the important aspects of this style of writing in mathematics.


Objective(s): The learner will develop the ability to monitor their thinking as they engage in mathematical problem solving. [According to the book, How Students Learn: Mathematics in the Classroom (National Research Council 2005), this is an essential principle to learning.]


Time: The first demonstration of the approach usually takes a class period. Shared practice, between the students and teacher, may require another couple of class periods. The goal is that after this initial period of scaffolding learners can use the metacognitive mathematical memoirs on a regular basis throughout the remainder of the school year. During the scaffolding, the mathematical content is still being addressed as it is the topic of the memoirs.
Activity: Have the learners look over a group of problems and identify one that represents a ‘just right’ problem – not too hard and not too soft; this might be a problem set they have worked on previously or it might be the first time they have encountered the problem. The idea behind selecting a ‘just right’ problem is that the learners want to be able to tell an interesting story of successfully solving a problem including struggles they encounter along the way.
The learners are asked to describe how they went about solving the problem and what they were thinking as working on it; this represents the metacognitive aspect of the activity. Because memoirs can include embellishments to make the story more interesting, the learners are encouraged to be creative (yet realistic) in describing the “challenges” they encountered along the way. In this way, they are anticipating problems associated with the content.
Pros: (1) I have found these memoirs support learners’ in both a better understanding of the mathematical content and a clearer picture of the process of problem solving; (2) The learners’ writing also provides insight into their thinking – something I often found lacking in their previous assignments, even when they were required to show their work; and (3) The memoirs have been much more interesting for me to read than a solution set – and I only read one or two instead of an entire set.
Cons: (1) Like any new approach, learners often balk at having to write in math class; (2) Also, if learners don’t have experience with metacognition, it can be initially difficult for them to write about their thinking beyond, “I just know it.” It will take time and modeling by the teacher for the learners to become more comfortable showing their thinking as well as their work; and (3) It takes longer to grade a memoir than correct a traditional assignment.
Assessment:  For simplicity sake, I often use these four Cs in evaluating learners’ efforts. Learners must have met the expectations at one level to move onto the next. There are opportunities for revision in order to support success.
Lessons Learned:  Do not try this alone – ask for support from our writing colleagues.


Activity: Choice [30 minutes]
Each workshop participant made a decision regarding how to proceed in order to further develop his or her understanding of Metacognitive Memoirs. Some people chose to look at existing models: High School Student (This is the result of a web search from many years ago. I would appreciate any help identifying the source so I can give credit where credit is due.), Preservice Elementary Teacher, and Preservice Secondary Teacher. Others worked on solving and writing their own Metacognitive Memoir using one of these problems: Which is 19/24? or Sowing Seeds.


Reflection: Author's Chair [10 minutes]
I asked one of the participants who had been working on writing his own Metacognitive Memoir to share with the group using an approach that I have adapted from literacy instruction.
What did he do?
He selected to work on "Which is 19/24?" because it related to struggles he was aware of that some of his current students were experiencing. He explained how he used what he knew about common denominators to narrow down the computations he would ultimately have to do. As it turned out, this approach arrived at a solution without having to do any fraction addition or subtraction.
So what did he learn?
While he wrote in great bit detail how he went about solving the problem using the common denominators as a sorting mechanism, he had not completely shared his thinking. Upon reflection, he recognized that he had thought about and dismissed using other approaches (compute all the items or use a benchmark of 1 to sort the items) because they would not be as efficient. In order to make his thinking visible, he realized that he needed to include this information in his writing.
Now what will he do with his learning?
Besides being more aware of his thinking (metacognitive) and sharing it with his learners, he also discussed how he might modify the problem so that his learners would have to do some computation. He acknowledged that he had done some deep, conceptual mathematics, but he wanted the problem to address some content skills as well. The other nice thing about using Metacognitive Memoirs is that you can tailor them to the needs of your learners.
Posted by delta_dc at 11:55 AM