How old would you be on Wumania?

In this post, I want to share a modified version of a home workshop that I assign in our second mathematics education course for preservice elementary teachers. This is the first in a series of posts around the number system used in a fictional land called Wumania. I was reminded of how much fun I have with these lessons after watching this video of my former colleague, Stephen Blair. If you enjoy the activity and want to share your ideas, please do so in the comments.


Connection Workshop (Wumania)
Goal: The learner will attempt to clarify the meaning and purpose of a number system by making connections.

Schema Activation: In your journal, make a list of the places where we encounter numbers in our lives.

Focus: Making Connections
Activity: A History of Wumania's Number System
There is a civilization far, far away called Wumania. In fact, it is so far away that it has had no contact with our civilization, except for this one story that I heard. The story goes like this:

When counting fingers, if a Wumanian held up no fingers, she would say, “na,” what we would call zero. For one finger, she said the first letter of their alphabet – in our case that would be A. Two fingers were B. Three fingers were C, and so on. The problem was that when they got to their Z, they had run out of letters and therefore out of numbers. Anything more than Z was “many" to Wumanians.

The people of Wumania were very dissatisfied with their own number system. In fact, the Wumanians were so dissatisfied they offered all of their students generous grants to work on designing a different number system. Wumania's students worked on this problem for several years until one day a certain student announced the successful design of a new system. The new system, the student said, would use only the five symbols from the Wumanian flag:

Furthermore, the language representing the numbers would be comprised entirely of combinations made from the following words: na, yi, er, san, si, and wu.

The only problem was that before the student was able to publish a full description of the number system, she disappeared. But she left behind the different sized blocks that she was going to use to explain it. 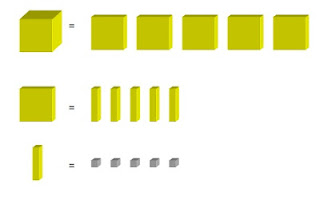 Your task is to come up with a possible number system for Wumania that fits the description. It might help to answer these questions: