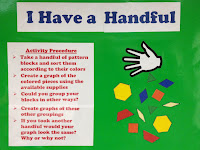 In the last post, I shared how I used ideas from Orchestrating Discussions to:
When the time came to test out the activity during a mock FMN, I asked preservice teachers from each group to observe their peers carrying out the tasks and ask question that would make their peers' thinking visible. The observers recorded this information using the monitoring sheet, which I gathered onto a single form (provided below).

Because my principle goal was associated with the target, Represent and Interpret Data, I concentrated on selecting work associated with the second task on the monitoring sheet. (I took pictures of the participants' efforts in order to share them here.) While some participants laid out the Pattern Blocks they grabbed into something resembling a real graph and others translated their handful to Unifix Cubes, everyone went on to create more permanent graphs. Therefore, besides acknowledging this step, I would not want to spend class time asking participants to share these real graphs. 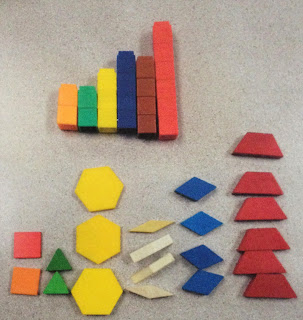 Instead, I would focus on the permanent representations participants created and how these representations might be interpreted. In particular, the work selected would relate to the Common Core indicators 2.MD.10

Draw a scaled picture graph and a scaled bar graph to represent a data set with several categories. 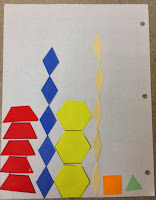 L1's work reflects the representation closest to the actual activity, so I would ask her to share her work first. Then we could discuss ways it might be interpreted. If it is not raised by the class, I would point how the graph might be misinterpreted: "It seems like the graph shows there is more yellow hexagons than red trapezoids. Is that truly the case?"

Next, I would have T1 share his graph. He drew the shapes inside squares on a grid; this seems to address the possible misinterpretation that the more direct representation might foster. A person reading this graph can see immediately which shape occurred the most in T1's handful. But as the number of red trapezoids is so close to the top, it raises another question: "What would we do if there were more of a shape than squares in a column on the grid?" Two participants encountered this problem and I would ask them to follow T1.

As you can see by her graph, A1 dealt with the problem of having more blocks than squares by amending the bar graph. She added ellipses to the top of the graph to indicate that some items from the data set were omitted. Also, the number of total items in each of the "over-abundant" categories were written directly on the graph. While this graph conveys all the necessary information, it can impede quick interpretation of the data because some of the visual characteristics are lacking. 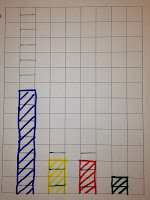 J2 addressed the issue of having too many blue rhombi for the column by splitting the squares in two. Each half represents one block. She standardized the unit for the other shapes, thereby making it easy to compare the quantities. This approach begins to get at the idea in 3.MD.3 of a "scaled bar graph." The sharing would end with this example and lead to a whole class discussion meant to bring the ideas associated with these models together.


Connections
Looking Back
I would want the participants to notice the multiple approaches that can be used to represent a data set and how the representations are related. For example, most of the graphs reflect a one-to-one correspondence. Discussing the limitations of this approach seems a natural next step as we could revisit the possible misinterpretations (L1's work) and the need for creative modifications (A1's work).

Looking Forward
In order to move toward 3.MD.3, I could ask them to consider which approach they might use if they were going to graph the "handful" results from their group or the entire class. Hopefully, increasing the size of the data set will push them to considering a scaled approach similar to J2's work. This would lead to the next task associated with this activity

Next Time
Glows
If I were to do this activity again, I would continue to provide participants with a variety of ways to represent their data sets. This results in a rich source of approaches to choose from when engaging in the Selecting phase.

Furthermore, because I am not asking for the "best way," participant are free to select methods like the picture graph because they want to be creative rather than feeling the need to be efficient. Hopefully, this lessens the likelihood that participants will somehow link approaches shared earlier in the Sequencing phase with the creator's ability - it was simply a choice.

Grows
Next time, I want to make sure that the Pattern Blocks are equal in thickness. While having a combination of Pattern Block sets mixed together made for some interesting approaches, it could potentially be a distraction, as this stacking shows. It can create extra categories that are not always consistent across the buckets from which the participants grab a handful. The task is rich enough as it is without adding this extra variable.

Also, after graphing one handful, I would ask students to predict how many would be in two handfuls. This would hopefully, create interest in conducting another experiment. If they do grab two handfuls, this increases the likelihood that students creating a bar graph would encounter the issue A1 had with not enough grid space.