Previously in this series, I shared about action plans (here) and how one teacher used an action plan and observation to improve her use of questions in assessing learners (here). In this post, I provide another example - this time focusing on evaluation. (I have explained before that our framework treats assessment and evaluation as different phases of the Teaching-Learning Cycle.) 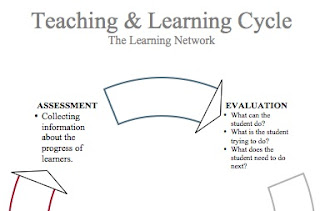 The teacher being coached was using entry slips to gather data on her learners but was unsure how to interpret the data. Her question to develop her understanding literally asked, "What do I do now?" It was with this in mind that I entered the class and saw the following on the board in the front of the room. 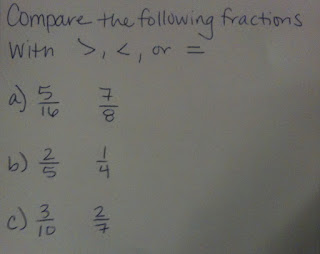 After about five minutes, the teacher collected the sixth-graders' efforts, looked over them, and, satisfied, moved on with the rest of her lesson. 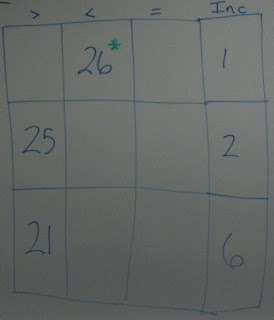 During a lull in the lesson, I asked if I could look over the slips. With her consent, I began to analyze the assessment data. I organized it using the table shown. As you can see, there were no incorrect answers, however, there was a problem. Approximately 22% of the learners were unable to complete the task in the time provided. Fortunately, the teacher had asked the learners to show their work so that some of their thinking would be made visible to us. This would provide further insight into the problem.

I began to apply the evaluation framework by asking myself, "What can they do? What are they trying to do? What comes next?" Looking over their work, it became clear that they were fluent in comparing fractions using common denominators. Below is an example of how nearly all of the learners went about finding the first answer. 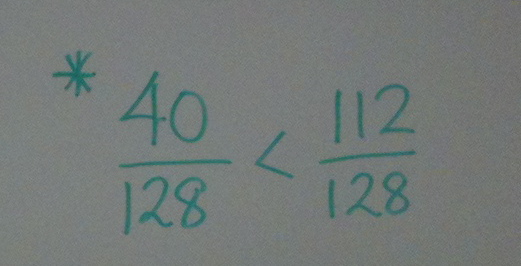 This also seems to suggest where they were approximating. By trying to apply this method (finding a common denominator by multiplying the two denominators) to all the comparison problems, some learners had run out of time. It seemed clear to me that what came next was considering alternative approaches to comparing fractions that might be more efficient. I shared the following list with the teacher:
We talked about ways to introduce these strategies and how to make subtle shifts to the worksheets that she was expected to assigned. By asking the learners to look over the worksheet and match each item with a preferred method, they would be engaging in more meaningful work than simply applying a particular approach over-and-over again. As always, I left it open for this shift to be a part of the teacher's next action plan.
Posted by delta_dc at 9:48 AM