Why do I make these things so hard? 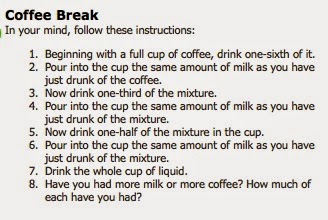 During a Math Institute put on by the Public Education & Business Coalition (PEBC), we were asked to monitor our thinking while working on the Coffee Break problem from (warning, this link includes the answer) Discovery Education. Essentially, we were creating a Metacognitive Memoir that would make our thinking, not just our work, visible for others to see. Being familiar with this form of math writing, I quickly began working on solving the problem.

I started by reading the problem - the entire problem. In the past, there were times when I began working on a problem without understanding it. This lead to "wasting" time on unproductive approaches. I did not want something like that to happen on this problem.

The very first step, "Beginning with a full cup of coffee, drink one-sixth of it," got me thinking about similar fraction problems I have worked on. The second step, narrowed the list of similar problems to those involving mixtures. Fortunately, I kept reading because if I had started solving this problem with those previous approaches in mind I would have gotten off to a "bad" start. This problem was quite different from those I had worked on before.

As I was reading, mental images of coffee cups began coming to mind. At first these were simply generic cups of coffee. But pretty soon I realized that I was going to need a model that could represent the quantities presented in the problem. 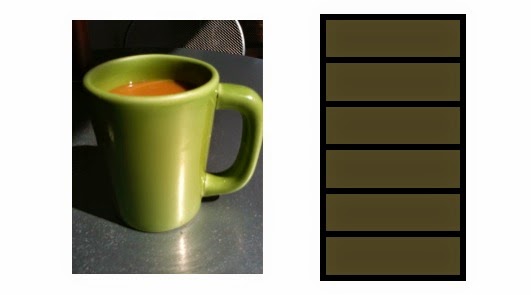 In order to make the steps of my thinking visible, I decided to make a series of images, like a story board, that showed the ways I was picturing the different steps. First there was the whole cup of coffee. Then there was the cup filled with five-sixths coffee and one-sixth milk. Next I drank a third of the mixture ... 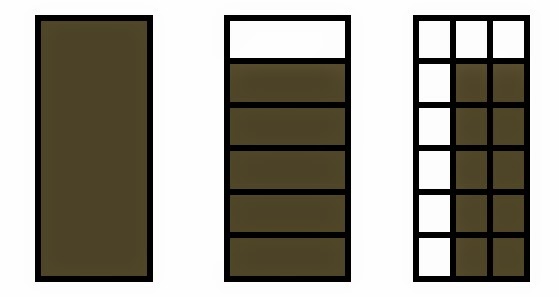 While I initially took the top third, I quickly realized that the milk would need to be mixed with the coffee. I decided to show this by splitting the cup up vertically. But what was I going to do to show drinking a half of the mixture?

As I was debating how to represent this step, and writing down my thinking about it (I could make a three-dimensional model or split each of the eighteenths in half), the facilitator asked us to stop working on the problem so we could share our results. RESULTS?!?! I felt like I had barely gotten started.

Sure enough, some of the other participants had answered the questions:
What happened next got me wondering, "Why do I make these things so hard?"

Anyone want to guess what happened (what one of the participants said) and why I made this problem so hard? If you'll put your guesses in the comments, I will update this post with the answers next week.