What's your plan to improve?

One of my favorite activities to do with teachers, both preservice and inservice is the Marshmallow Challenge. I view it as an excellent metaphor for planning and improving lessons. If you are unfamiliar with this activity, then you might want to watch this TED Talk before going any further.


Often, teachers fall into the same trap as others described in the talk. The teachers develop elaborate plans, create tall spaghetti structures, and wait until the last second to put the marshmallow on top (use this bomb timer to add suspense). Usually, the structure cannot support the added weight and it falls or breaks.

So what does this have to do with lesson planning? I see the same thing happening in developing and implementing lessons - especially among new teachers. There is a great deal of planning beforehand in order to make things perfect. They work until the last minute, trying to get everything ready, but when the lesson finally encounters the learners it falls apart. Novice teachers are not the only ones to experience this phenomenon, however. Personally, I have had my fair share of lessons crash and burn despite massive preparation. In fact, I have wondered if the preparation was sometimes the problem.

Near the end of the talk, Tom asks, "What is your marshmallow?" For me it is a focus on student learning goals. With that in mind, and an awareness of how building on and improving prototypes increases the likelihood of success during the challenge, I have decided to try to plan differently. I want to start by designing a lesson with the least amount of support necessary to achieve the learning goals. Then I will try it out, gather data on whether or not the structure supports my goal, and make the necessary adjustments. If things go according to plan, I can create the next lesson/scaffolding using the same approach - start simple and add on as necessary.

This past week, it was interesting to watch two groups that contained members who had preformed the Marshmallow Challenge in other settings. Each followed the kindergarteners' approach of making successive prototypes. Where they differed was in their acceptance of their circumstances.

One group kept adding on until the very last minute - continually tinkering with the prototypes. Unfortunately, they ran out of materials and the final structure was unsteady and fell over as the timer went off. A few minutes earlier it was standing tall: 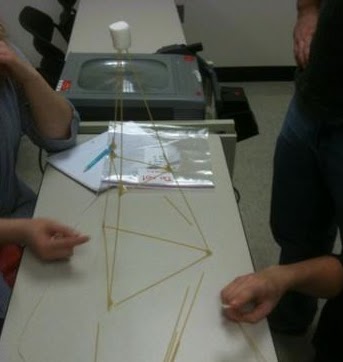 The other group "finished" with about four minutes left. Given more time and resources, they might have been able to build something taller, but under the circumstances they were satisfied with their effort. They ended up besting the only other standing tower by about 6 cm. 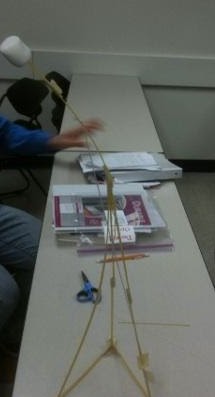 It is only a metaphor, but I think the Marshmallow Challenge has a lot for us to think about as we consider improving education. Michigan is in the midst of considering plans for overhauling school funding (and therefore schools) but these plans have the feel of untried spaghetti towers not tested prototypes. As Stigler and Hiebert point out:

Traditionally, Americans haven been more willing to accept dramatic failures than to applaud or even appreciate, small successes. (page 139 of The Teaching Gap)

If we are to succeed at this challenge of education reform, then we ought to heed the lessons of the Marshmallow Challenge.
Posted by delta_dc at 1:12 PM 1 comment:

When will it end?

[In the United States] Teachers act as if student interest will be generated only by diversions outside of mathematics. (The Teaching Gap, p. 89)

Schema Activation: Journal Jot
Describe the process of converting three-nineteenths to a decimal

Focus: Changing the Script
We have read in The Teaching Gap how teaching mathematics in the United States typically focuses on preparing students to perform prepackaged procedures. What if we tried to change the focus from mathematical procedures to mathematical practices? In this workshop, try to refocus your efforts away from simply following a mindless process and explore what new knowledge is waiting to be learned. As you work on the following problem, please keep track of how you are (or aren't) engaging in these practices.

[The follow represents how learners have engaged with this activity.]

This seems like a fairly straightforward exercise. Why not just plug the numbers into a calculator? The converting-a-fraction-to-a-decimal procedure requires us to divide the numerator by the denominator until the decimal either repeats or terminates. Three divided by nineteen - easy. Except, the quotient displayed on the calculator screen does not provide enough information since it does not show enough places.

Maybe using a different calculation tool would help. What about an Excel spreadsheet?

This seems to suggest that three-nineteenths terminates. And it matches the calculator's answer. A problem solver would not simply accept these and be done - would she?

What other strategies could apply? 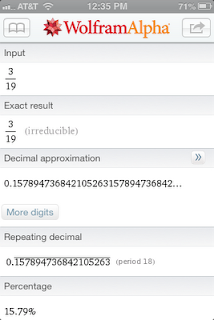 [Learners often explore these approaches with various levels of success. Having monitored their own progress, the learners often turn to other strategies or decide to seek a solution to other related problems. They do not want to be stuck trying the same approach over and over again.

WolframAlpha has added a wrinkle to this activity as it provides an exact decimal representation for three-nineteenths. Originally, we thought this would be problematic as it gives a clear answer to the original question. It is interesting, however, that focusing on a problem solving approach generates similar alternative/extension problems whether or not the answer has been found.]

New problems:
[Answers to these alternative/extension question rarely are answered in the time available to the workshop. Learners are encouraged to continue exploring the problems if they are interested. Even though they have not come to any firm conclusions, they usually have some interesting answers to the reflection questions.] 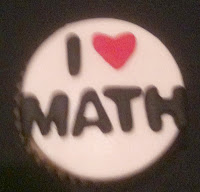 There's a push in the United States to get more people interested in math and science in order to have leaders in these areas for the 21st-century. So I find it confusing that when I talk to some people about doing project based learning (PBL) in math there is a lot of equivocating. This seems especially true in high school mathematics courses where the content is often disconnected from what people really do on a daily basis. But if we want people to become mathematicians, why can't the project be related to the work that they do?

A Partial PBL Project Outline
(thanks to Mike Kaechele)


Granted, there is a lot that I don't know about PBL (though it seems a lot like the outcomes-based projects I did in the 1990s) and this particular project is in need of much more detail, but I want to gather more information about the process. Also, I didn't want to set up a bunch of straw-man arguments about PBL in math just to prove a point. I really do want to know whether doing math would be an acceptable PBL project.