Is arming educators a good idea?

An interesting consequence of compulsory education in the US is that nearly everyone has experienced a significant amount of time "in the classroom." As a result, many people consider themselves educational experts. The problem is, they have only spent time on the student-side-of-the-desk. Teaching is much more than what we observe as students. What a student sees is only a small fraction of the entirety of the practice. 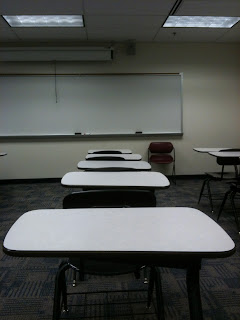 This misunderstanding about what it means to be a teacher is especially apparent when politicians and lobbyists suggest that arming educators might be a reasonable response to the recent school shooting in Newtown, CT. I am willing to bet many of them have not spent significant time in a classroom as a teacher. Adding "armed guard" or "first responder" to the already growing list of roles a teacher must take on these days is ... how do I say this delicately ... removed from reality.


Please, the next time a "great idea" about improving education comes from some "expert" without teaching experience, check it out with our teachers.

Email ThisBlogThis!Share to TwitterShare to FacebookShare to Pinterest
Labels: Teaching is Hard

Did you get anything good?

For years, I have tried to write first semester exams using a holiday theme. Even as a middle school math teacher, I set problems in the North Pole or around different traditions celebrated this time of year. Given a recent #mathchat on holiday mathematics, I thought I would share some of the problems here. Consider it my gift to you. Happy Holidays!

On the twelfth page of the test my teacher gave to me, twelve days of giving.

Use the lyrics from the traditional song, The Twelve Days of Christmas, to complete the table shown below.

Show how you could represent the gifts given each day using simple pictures, a recursive formula, and an explicit formula. 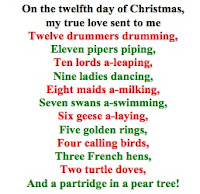 On the eleventh page of the test my teacher gave to me, eleven Lions playing. 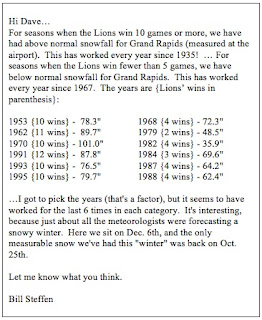 A while back, WOOD TV8 meteorologist, Bill Steffen, made a claim that the Detroit Lions’ record might be related to the amount of snowfall we get in Grand Rapids.  I emailed him asking for more information and part of his response is shown at the right. 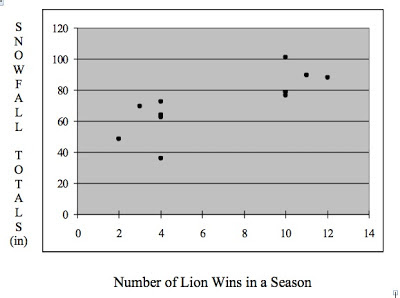 On the tenth page of the test my teacher gave to me, ten snowmen chillin'.

The idea of using snowmen glyphs to represent some of our winter and holiday preferences was introduced here. Recall that if the person making the glyph wears a hat during a typical winter day, then he or she would fill in the snowman's top hat. The same goes for wearing a scarf. Given the 10 snowmen shown below, answer the following questions. 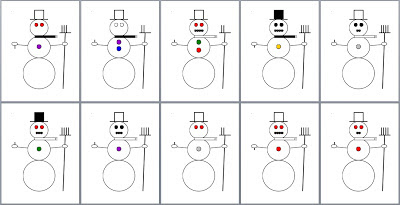 On the ninth page of the test my teacher gave to me, nine cookies baking.

As you might suspect, Mrs. Claus is a wonderful baker, especially when it comes to cookies. Her specialty is called Santa’s Hats, which are basically isosceles triangles with red frosting and sliced marshmallows across the bottom and on top. Because so many of the cookies she bakes are for the elves, Mrs. Claus thinks of a batch of cookies in terms of three-quarters of a dozen. If each of these batches takes eleven-and-a-quarter marshmallows, then how many marshmallows are required for a dozen cookies?

On the eighth page of the test my teacher gave to me, eight reindeer playing. 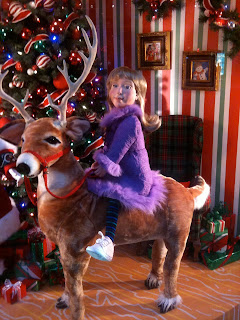 You know Dasher and Dancer and Prancer and Vixen, Comet and Cupid and Donner and Blitzen: But do you recall… what you learned in math class at all?  Use these eight famous reindeer (sorry, no Rudolph) to solve the following problems.
On the seventh page of the test my teacher gave to me, seven candles burning.

A manufacturer of Kwanzaa candles did some research and found out that the candles do not all burn at the same rate. Below are box-plots representing the number of minutes it took for each candle to burn completely, separated by color (100 candles of each color were tested). 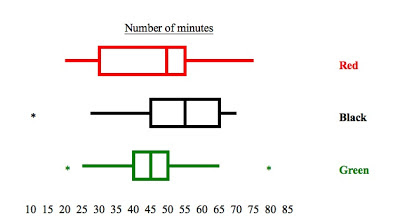 Which candle color seems to last the longest?  Describe how the box-plots support your reasoning.


On the sixth page of the test my teacher gave to me, six bulbs a blinking. 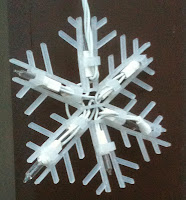 In order to save money this year, Dave decides to buy outdoor bulbs at Ben’s Bargain Bulb Bin.  The bulbs there are cheap, and there are a lot of them (some say an infinite amount), but only three out of every four bulbs work. Dave needs 6 bulbs for the end of each snowflake in a string of lights, but if even one bulb doesn't work, then the entire snowflake remains dark. What are the chances that a snowflake using bulbs from Ben's will be unlit?

On the fifth page of the test my teacher gave to me, five Pecan Puffs.

Just in time for the holidays, a new item has been added to the J. Peterman Candy Collection – Perfect Pecan Puffs. These are five pecan puffs packed in cube-shaped boxes that are arranged to look like a "P" (see ad below) held together using green holiday paper. The paper is expensive, so Elaine suggests using a "net" to cover the packages. What might this net look like?

PS: Kramer thinks that this is the perfect gift for Festivus!

On the fourth page of the test my teacher gave to me, four lighted trees.

Clark Griswold just purchased The Growing Tree Kit to add to his Christmas light show. Each kit has four, green, foot-high triangles/trees and four strings of red lights that fit around the perimeter of each tree. What makes these trees special is that they stack to make larger trees. Then the string of lights can be put around the perimeter of the larger, combined tree (see the examples below).
When Rusty puts together the combined tree, he notices that two of the strings of lights are left over. "That's not a problem," says Clark. "We'll just add them to the roof. What I'm worried about is the visibility of the tree. I think we need to make it bigger - maybe 10-feet tall."

In order to make a 10-foot tree that is mathematically similar to the smaller trees, how many kits does Clark need to buy? Also, how many strings of lights will be needed to light the 10-foot tree's perimeter? What do you notice about the area and perimeter of these similar triangles as they dilate?

On the third page of the test my teacher gave to me, three wise men.

In the story of the Magi, three wise men come from the east looking for the king of the Jews. On their way, they stop at King Herod's for directions. They find out that the Messiah was to be born in Bethlehem. Imagine that the network shown to the right represents the many paths that the wise men could have taken.

On the second page of the test my teacher gave to me, two types of stools.

In a shed at the North Pole are the parts for 75 stools for the elves in Santa's Workshop. Some of the stools will be three-legged and some will be four-legged (for the bigger elves like Buddy). The shed contains 75 seats and 259 legs. If Santa does not want any parts left over, then how many of each type of stool can be made with these parts? Please use two different representations (pictures, words, symbols, ...) to communicate your thinking.

On the first page of the test my teacher gave to me, a Dreidel with a counting tree.

The Dreidel is an integral part of the celebration of Hanukkah. Children play by spinning a Dreidel and depending on the side it lands on they win or loose candy. Using the modified rules shown below and this online Dreidel, investigate what happens on two successive turns. 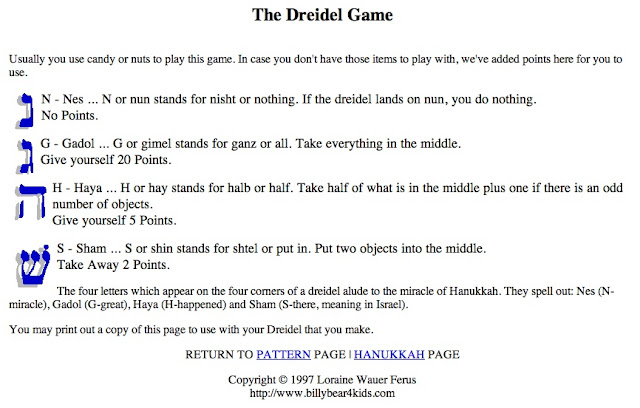 Specifically:
Conduct ten trials and record the cumulative points won or lost as a result.

Dave conducted 990 trials of his own (see the table below). Add his results to your own, and answer the questions of interest. Why is this experimental probability?