What is Fluency in Math?

When I was a junior in college, several of my friends spent a semester studying in Heidelberg, Germany. I decided against going because knowing German or being willing to learn it was a prerequisite for the program. One of my friends, Scott, thought this was funny because the only German he knew/learned was, "Bitte, haben Sie einen Plattenspieler?" which translates to "Please, do you have a turntable?" I thought this was pretty funny, too, and I liked the way it sounded, so I also memorized the question. Clearly, this didn't make me or Scott fluent in German. In fact, unless I'm talking to some hipster familiar with record players, my question probably doesn't even make any sense to him or her anymore. I often share this memory when a discussion about fluency in math turns toward the necessity to be fast and accurate with facts or some procedure. While speed and accuracy might result from fluency, speed is neither a requirement of nor a support for fluency.

Consider the actors playing Klingons on Star Trek: Discovery: they correctly deliver their lines without any pause. Are they fluent in the Klingon language?

Perhaps (some Trekkies are), but more likely they are professionals that have memorized a script. They are not responding to something said by another Klingon actor, and I doubt many of them would be able to improvise new dialog.

Is Siri fluent in mathematics? She is certainly fast and accurate.

But ask her how she arrived at her answer, and she is at a lost.

What does it mean to be fluent? Fluent speakers demonstrate flexibility in their language usage - the ability to play with words and use figurative phrases. Certainly, there is also a need to know the words and grammar associated with the language. However, this alone isn't enough to be fluent in the language.

And, in my opinion, knowing alone is not enough to be fluent in math, either - no matter how quickly you can arrive at the answer.

So, how am I wrong? I'm looking for pushback before I tell this story again. Make some comments and make me smart.
Posted by delta_dc at 1:22 PM 3 comments:

Should there be guns in schools?

I intend to share this letter with my governor and as a letter to the editor. I would appreciate your feedback in the comments. Thank you in advance.


On November 8th, the Michigan Senate passed legislation (584, 585, and 586) allowing individuals with concealed weapons permits to request permission to carry guns in schools (and other previously gun-free zones) with extra training. “[A gun-free zone is] a target-rich environment for people that don’t abide by the law, and people should have the ability to protect themselves, wherever they are,” explained State Senate Majority Leader (and my senator) Arlan Meekhof. This follows the narrative often accompanying such legislation: the only thing that stops a bad guy with a gun is a good guy with a gun.

I understand why this is a compelling story; it makes us feel safe, empowered, and may even touch on our dreams of being a hero. There's even a recent example of a good guy with a gun helping to stop a bad guy. But law enforcement officials, like the Houston Police Department, want you to consider a different story when involved in an active shooter event: run first; hide if you can't run; and fight only as a last resort.

Why would the police discourage you from being a hero? A couple of storylines come to mind:
We must also consider that confronting an active shooter isn't the only story that can be told around a good guy with a gun in a school. In fact, the good guy with a gun is unlikely to actually encounter an active shooter in a Michigan school given current statistics. So what other stories might we tell that involve a good guy, a gun, and a school - minus a bad guy?
I get why we would rather not consider these tragic storylines. Most everyone would prefer the happy ending associated with "good guy with a gun stops bad guy with a gun." But just because you like one ending better than the other doesn't make it more likely to happen - especially when you compare the hundreds of children accidentally shot each year with the handful of heroes.

We ought not be making laws based on Hollywood happy endings. Instead, we need to consider the reality and the possible unintended consequences that occur when a gun is added to any situation. If we truly want to use "common sense" when addressing gun violence, just remember that no one ever got shot in a place without guns.

Should these bills reach your desk, please exercise your veto. Do not put our children at risk just so a few people can dream of being a hero.

Sincerely,
David Coffey
Posted by delta_dc at 6:39 PM No comments:

What does this mean?

The other day I was working with some high school students on problems like this one: I responded, pointing emphatically at the problem, "But what does this mean? How would you say it in words?"

The other student interjected, "The square root of 1 over 64." And then asked, "We should rationalize the denominator, right?"
STRIKE TWO!

I tried again, "You're focusing on what you would do. I want to know what you understand about square root problems. What if it was the square root of sixty-four, then what would the problem be asking you to find?"

The first student, clearly getting frustrated, "I'd take a half of 64."
STRIKE THREE! YOU'RE OUT, COFFEY!

I didn't see any point to continuing to frustrate them or me with more questions. So instead, I tried to model my thinking about solving problems involving radicals. 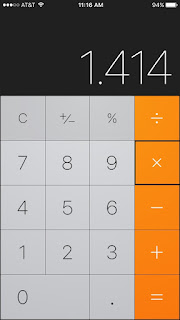 When I was a kid, I used to bring a four-function calculator with me on long road trips (like the one shown here). There was no square root button on the calculator, so I would play What's the Square Root by typing in a guess, pressing the multiplication button and then equals, and use the result to see how I might need to adjust my guess. It was hours of fun!

If my question was, "What's the square root of two?" then I was essentially asking, "What number multiplied by itself is two?" So when I ask what this (again, emphatically point at the original problem) means, I'm thinking about playing the game and trying to determine what factor squared gives this (more pointing) product, the number inside the radical.

I went back to our simpler problem, "So this is asking me, 'What factor squared equals sixty-four." They both answered eight.


Then we went back to the original. "What does this mean?"

They said, "What number times itself gives one over sixty-four?"


"Yes, What factor squared is one-sixty-fourth? Now that we understand," I said, "we can begin thinking about what to do."


It's troubling to me that so many years after Pólya wrote How To Solve It, that students race past the first phase of the problem solving process - Understanding the Problem. 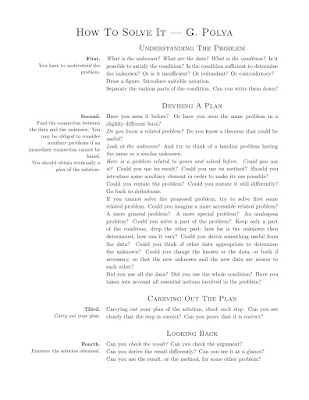