What happens when I add this?

My preservice elementary teachers are just finishing up a unit on patterns. Coming into the unit, one thing some of them struggled doing was writing an explicit rule for a pattern reflecting linear growth. In my opinion, this represents a gap in experience not a lack of ability. Since all of them have had some background in Algebra, the question is what experience are they missing? 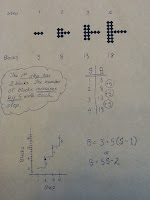 Coincidentally, a post by Dan Wekselgreene on Linear Patterns in Algebra 1 showed up in my Twitter feed this morning. (Thanks MTBoS!) It is a good example of immersing learners in different representations and supporting them in making connections that can result in deeper understanding of linear relationships. I had my students do something similar (see the example on the right) but for some it was not enough. There was still something missing. It is for this reason that I add one more representation (an idea I learned from literacy instruction) - a recount.

Recounts: Why? To give a sequential and detailed account of an incident, a series of incidents or a conversation

What? A written record of recall of events, with attention to sequence and accuracy, and often to detail

Doing a detailed account of each step provides learners with an added experience for seeing the structure of the linear pattern. A recount is demonstrated in the think-aloud provided below.

This seems to provide many of my learners with an experience that was lacking from previous math classes - a missing piece to the puzzle that bridges some cognitive gap. However, I am also aware that they have had experiences that the typical freshman in Algebra 1 might be lacking. What do you think, would adding a recount to your linear pattern unit help?

Will this be on the test? 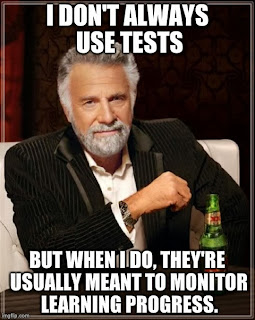 Sure, I can be smug when it comes to assessment. In my defense, I have been considering different ways to assess learning for over twenty years. Much of this work has involved using alternative assessments, but I am not above using more traditional approaches, like tests, especially when they involve some twist.

Because of the negative associations many students have with math tests, I try to make it clear that my tests are used to support learning. Each test is merely a benchmark that monitors our progress toward established learning goals. We use the results to determine what we can do and what needs more practice. Yes, at some point a grade gets put in the books, but there is no need to worry until that time comes.

That is what I tell them, but often this is what they hear:

So, it's no surprise when I start hearing this (of course I add the last bit in my head): 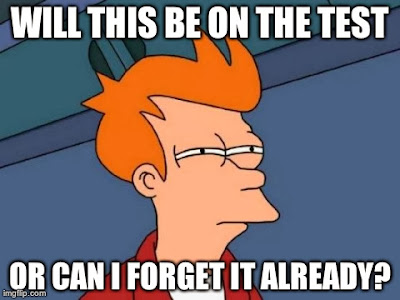 I understand that this is a conditioned response. At some point it worked; it made it easier to decide what to memorize in order to get a good grade. However, I want learners to decide for themselves what's worth remembering and to consider ways to make that learning last beyond the test.

So here's how I want to respond from now on (turns out I'm smug and snarky - who knew?) 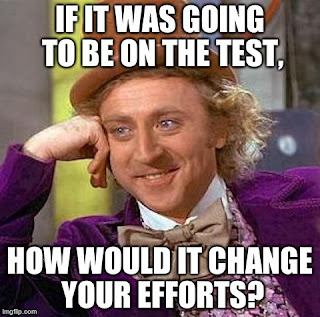 Does it make you more curious about the material?

Are you likely to try to learn more about the topic on your own?

Would you consider putting the ideas in a concept map in order to make connections?

Can you see yourself discussing the subject with others in order to talk your way to understanding?

Might you examine your thinking in light of the information and consider refining it?

In all seriousness, I recognize test-anxiety as a real issue among many of my students - an unintended consequence of high-stakes testing in the past. I hope my efforts at humor do not come across as flippant. My goal is to reframe "Will this be on the test?" as an opportunity to examine alternatives to the binge-and-purge approach to studying. Because if I am satisfied with learning that leaves instead of learning that lasts, then why even bother?

Why do we need celebrities to fix education?

Director M. Night Shyamalan is the latest celebrity to take a turn at telling us how to fix the education system in the United States. I just heard about his book, I Got Schooled, Wednesday and decided to check out his ideas. Rather than read the book, I thought I would follow how the media is covering his book tour. [updated 10/3/13] Already, I have found a funny prediction from Slate, a review from NPR, interviews from Leonard Lopate, Fox News Radio,U.S. News, The Dallas Morning News, My FOX LA, and Travis Smiley, and this from The Cycle.

It would be fair to say that I ought not criticize the book without having read it. But I do not plan on reading or critiquing the book. You see, I do not think nearly as many people will read the book as will watch the media-attention associated with the book tour. (To be honest, I have enough books to read on education reform.) Besides, the real problem is that the 5 Keys to Unlocking Quality Education he is touting ought to be questioned, not just accepted at face value. 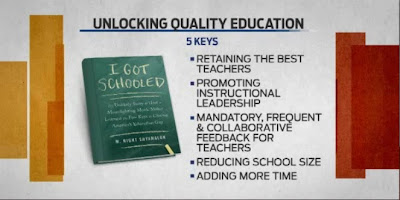 Unfortunately, once again the media does not appear up to the task. So John and I got the MTT2K band back together and created this parody. It will help if you watch The Cycle interview first as we are trying to mirror (in an alternative universe kind of way) what happens in that clip.

In case you did not make it all the way through our video, let me make it clear that we are mostly frustrated with a media that seems to be more interested in crafting questions than analyzing answers.

Mr. Shyamalan is free to offer his interpretation of the educational research, but, as I said before, I am not buying it. And neither should you. (Turns out Mr. Shyamalan agrees: "I really just don't know who could possibly want to pick up this book.") Go ahead and watch the celebrities share their education reform solutions, but then check out the actual education research. If you are interested in improving teaching and learning, read John Hattie's Visible Learning for Teachers. If you want to know about the achievement gap and ways to address it, read Claude Steele's Whistling Vivaldi.

And media, if you are paying attention, invite real experts to address educational issues and try to avoid the education celebrities. (Or be sure to add the following disclaimer, just like this reviewer did: "I won't pretend to know if whether Shyamalan's findings or theories are sound...")

Did you watch TEACH?

Friday night I watched the documentary TEACH with two other educators. Dad taught high school math and science for over three decades. My wife was an elementary teacher for 15 years. I taught middle school math and computers for seven-and-a-half years, making me the least experienced of the bunch, but we could all empathize with the stories being told.

And that seemed to be the point - to elicit emotions from the viewers. From the film's website:

Davis Guggenheim's award-winning documentary reveals the human side of the story: showing what it takes to survive the first year teaching in America's toughest schools. (emphasis mine)

Based on many of the Tweets posted to #TEACH, the movie accomplished its goal and touched many of those who watched.

It is important to recognize this as Mr. Guggenheim's vision for the film and understand that it must have influenced how he edited his footage. Just as a director who is adapting a book for a movie must consider what to keep and what to cut, Mr. Guggenheim could not hope to communicate the complexities of teaching in 35 minutes. Consequently, he presents a picture of teaching that diminishes the importance of certain aspects of the practice in order to focus on the teachers' stories. 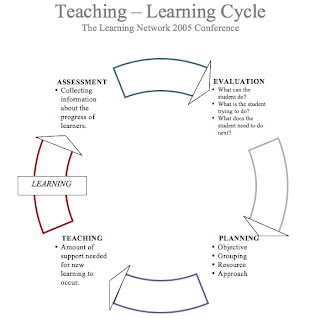 I started this blog as a way to chronicle my teaching practice. In particular, I wanted to focus on the framework known as the Teaching-Learning Cycle. To Mr. Guggenheim's credit, his documentary acknowledges each of the Cycle's phases. However, it gives too much attention to assessment. Here are some examples:
Given the current national obsession with test scores, it is understandable why assessment became the focus of the film. However, it is also important to see how the assessments added tension to the storytelling. We want to find out, "Will the students pass the big test?"

While this plot device was effective in driving the stories in TEACH (see also Stand and Deliver and Lean on Me), it is unnecessary. As Kathy said, then Tweeted, at the end of the film:

As I recall, these themes have been successful in many other stories.

Part of the problem is that the assessment storyline is also taking over the current education reform narrative. The intent again seems to be to create unnecessary tension to manipulate people's emotions. My concern is that we are being swept up in that emotion, thereby, attending solely to teaching and testing while diminishing what's really important - learning.