The #mathchat topic for August 18th was "How do I get students to take the first steps in problem solving?" During the course of the chat, I asked the following:

Here are some of replies: 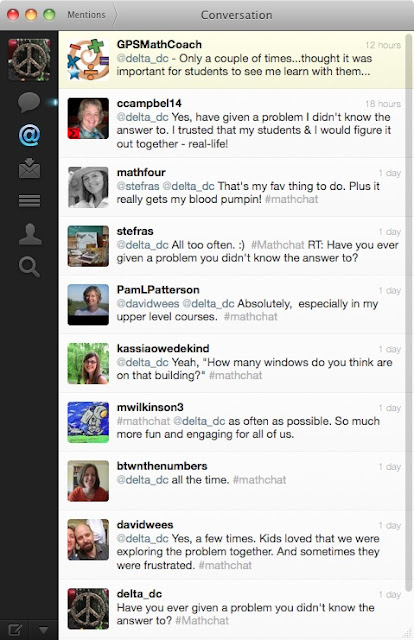 With the exception of @kassiaowedekind, very few details were provided. This is understandable given the limitations of Twitter, but I thought it might be worthwhile to continue the conversation using a venue that allows for more explanation. I will get us started with a couple of ways I have approached this question and then others can add their ideas in the comments.

The first approach I use is trying to avoid asking questions to which I already know the answer. I learned to do this while working with the first-graders in my wife's classroom. When I asked, "What is four plus three?" the first-graders typically responded with the expected answer and then waited for me to validate it. This was unrewarding to everyone involved. They were becoming reliant on me as the authority, and I really wasn't getting any insight into their thinking. Maybe they just knew the fact. Or they could have counted all, counted on, used doubles plus or minus one, or some other strategy. Or maybe they answered seven to every addition fact.

Instead, I decided to ask the first-graders, "How would you figure out four plus three?" Their answers to this were much more interesting to me. Although I had some ideas of how they might respond, I could not be sure and there were times I was surprised. Also, the first-graders always enjoyed sharing their thinking with me - much more so than just giving an answer.

The second approach is to share a problem I have not solved. I have some ideas of how to solve it but I have resisted the temptation to actually work on it. That way, when my learners ask if their solution is correct, I can honestly say, "I don't know." Then, they have to share their thinking, not just their answer, in order to convince me.

One of my favorite problems to ask the preservice teachers in my Teaching and Learning Middle Grades Mathematics course is, "When does 3/19 repeat?" We have tried graphing calculators and spreadsheet to no avail. As a result, we end up solving simpler problems looking for patterns and making conjectures. (I am told Wolfram Alpha can compute it but I refuse to spoil the fun - for now.)

Now it is your turn. Have you ever given a problem you didn't know the answer to? And if so, what was it and how did it go?
Posted by delta_dc at 7:30 PM